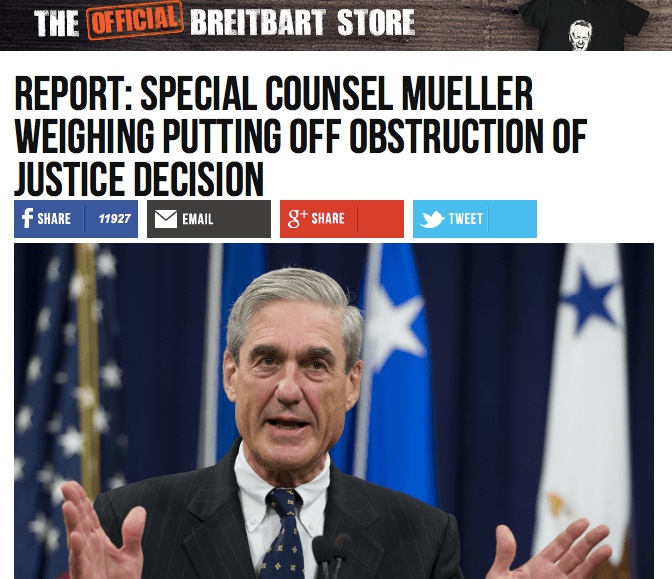 The polarized response to the Nunes memo, Russia indictments, and other Mueller bombshells are a good illustration of the fragmented media landscape in the United States. More and more, we see that right-wing media outlets are retreating wilfully into their own bubbles: from the Russia scandal to Roy Moore’s sexual assaults, these organizations have sought to dismiss and distort.

What do readers of these media think though? To get a better idea about what this ecosystem looks like up close, I gathered the 106 most recent Breitbart News articles related to the Mueller investigation and scraped over 300,000 comments. Which articles elicited the most engagement, and what are people saying about them? How long, on average, did it take people to comment on an article about Mueller? And could the comments section, like social media, be full of trolls and so-called “cyber troops” trying to shape the narrative in Trump’s favor?

(Techincal note: I used R for all of my analysis, including the scraping of links for articles, and then used the Digital Methods Initiative’s Discus Comment Scraper to scrape the comments since doing so with RSelenium was a bit time-consuming. I’ve limited the R code in this blog post, but I plan to add an updated R Markdown document later.) 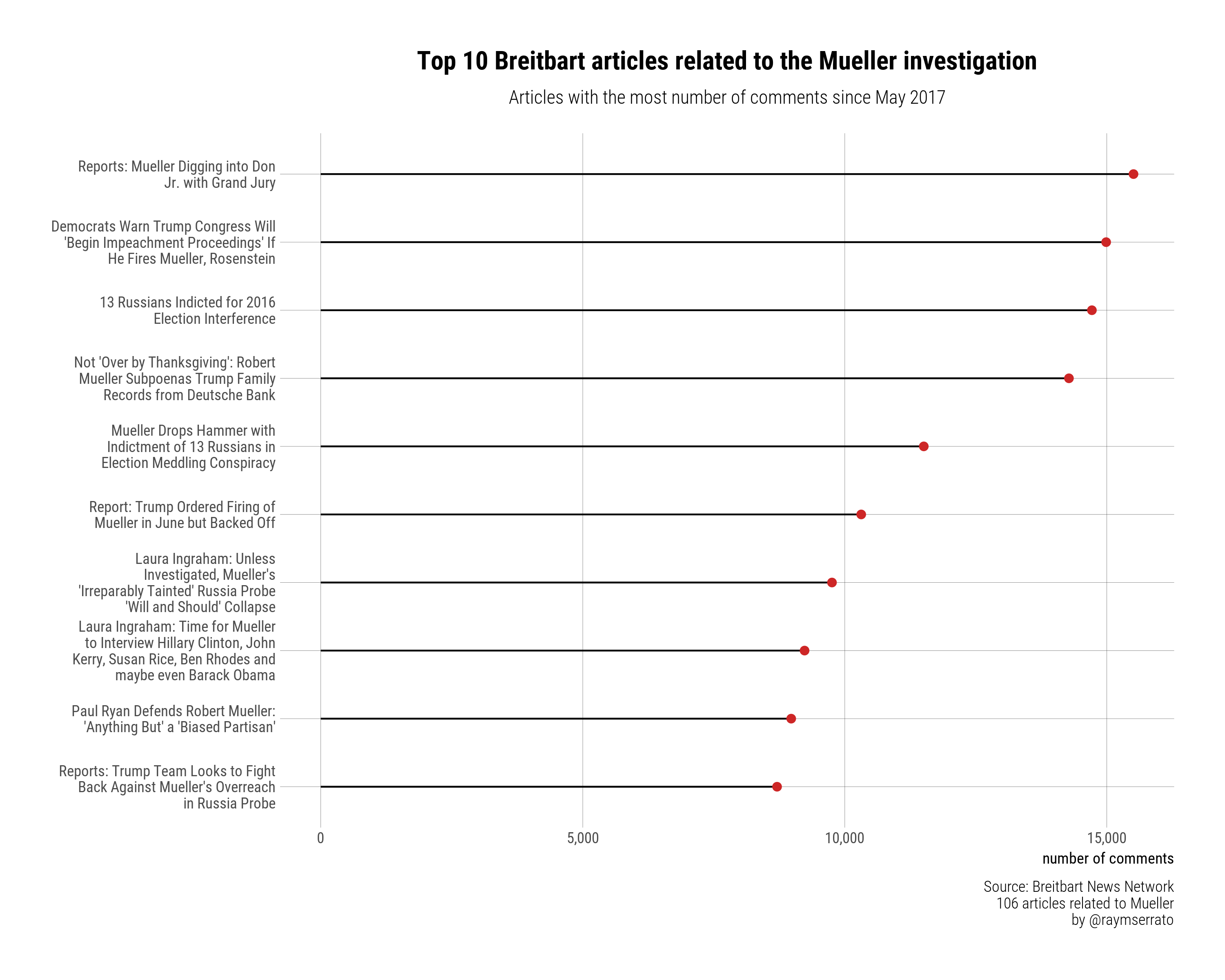 The Breitbart articles with the most comments are those about Mueller’s investigation honing in on Trump Jr. and the Trump family, as well as the recent indictments of Russians for interference in the 2016 elections, and the potential for impeachment. Laura Ingraham manages to make it into two of the top articles, with one article attempting to cast aspersions on the Mueller investigation and the other attempting to divert attention to Hillary Clinton, John Kerry, and former President Obama.

Clinton and Obama are the object of many articles on Breitbart News, so perhaps it’s unsurprising that they are also a fixation for many readers as well.

Using Julia Silge and David Robinson’s brilliant R package, tidytext, we can break readers’ comments up into individual words, remove common words (or so-called “stop words,” such as “the,” “and,” etc.) and count the frequency of their occurence. This gives us an idea about the main themes found in readers’ comments. 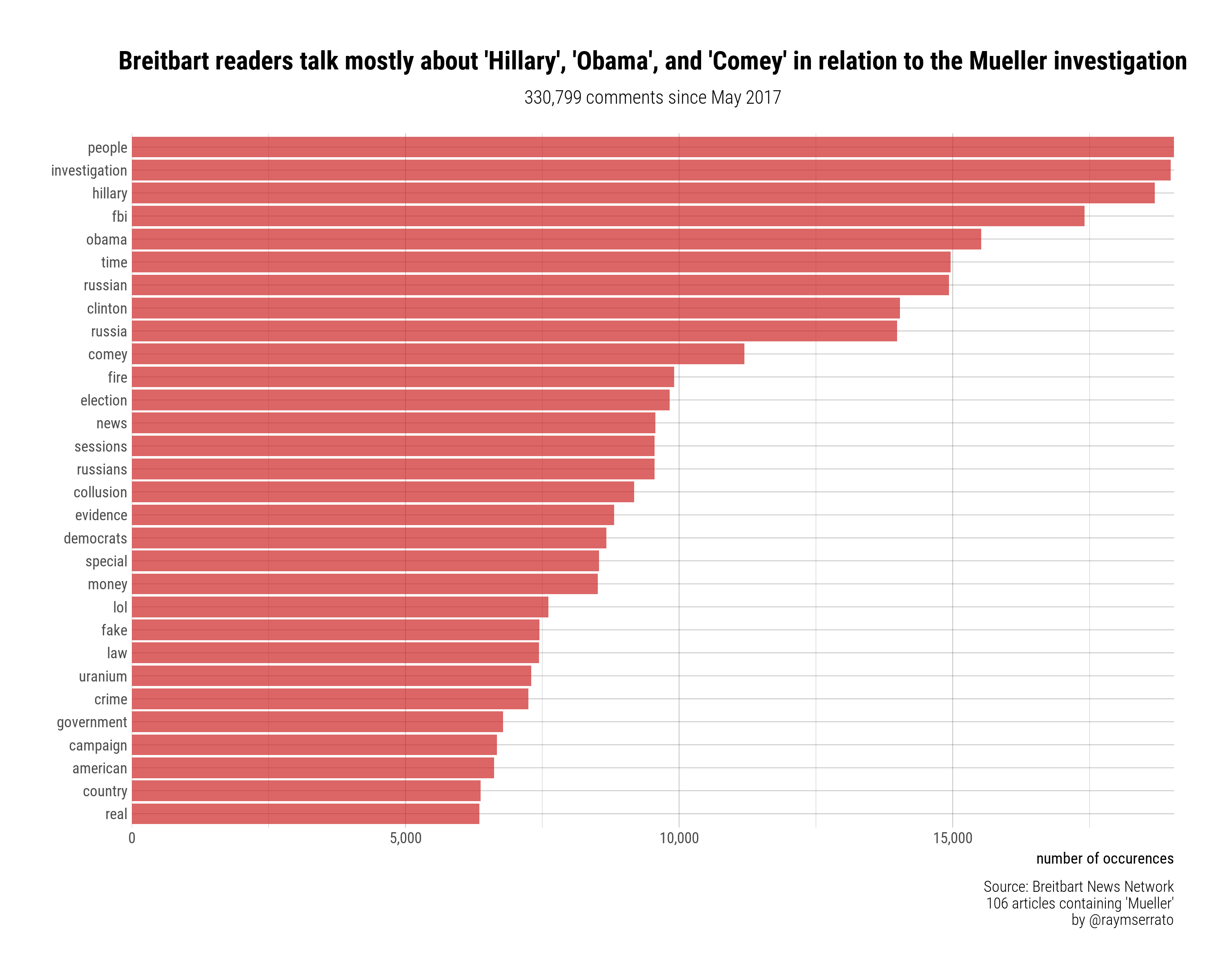 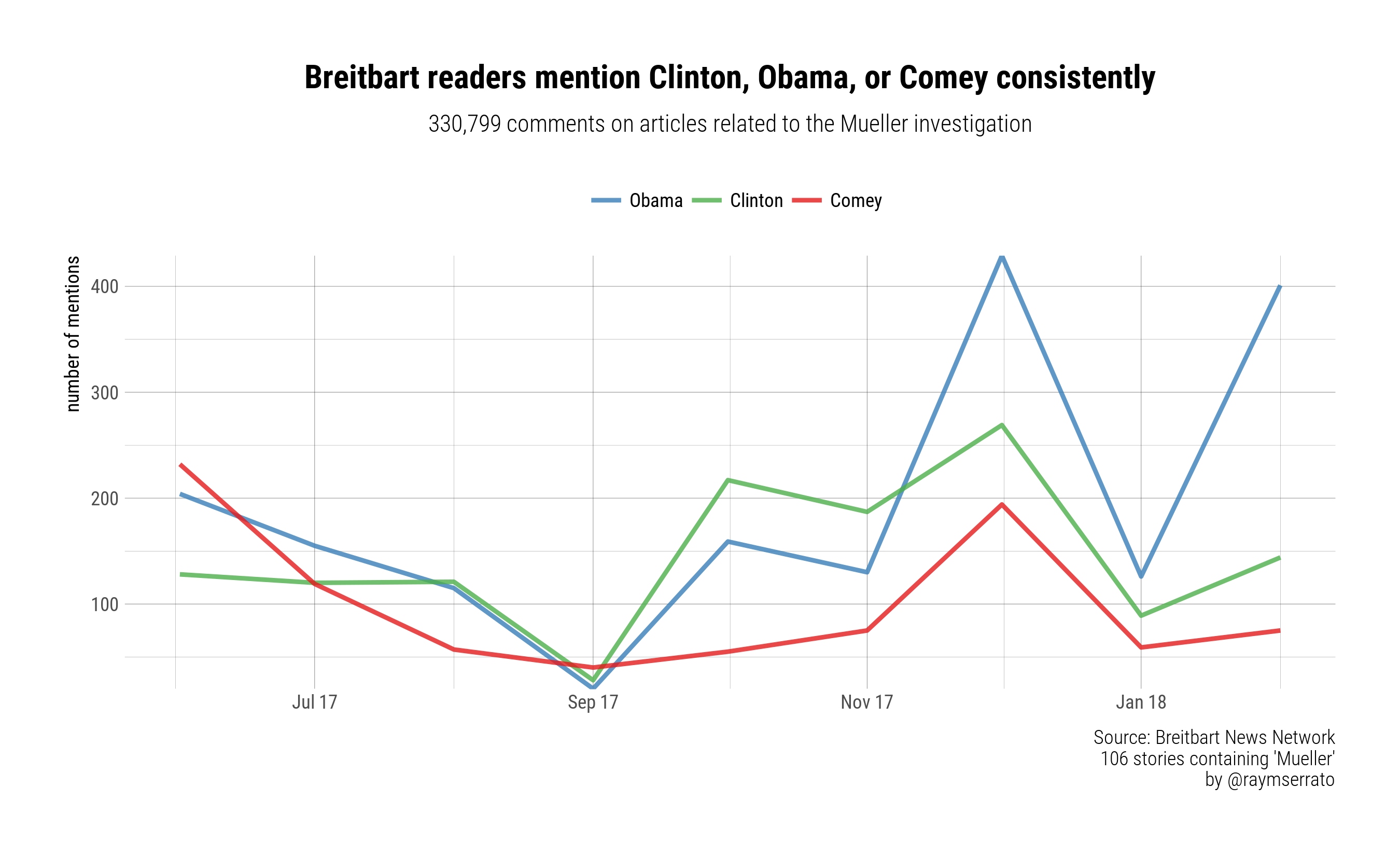 We see that the number of comments mentioning all three of them has stayed pretty consistent, and peaked in December 2017. What about “uranium” - how often are readers mentioning this word and why? 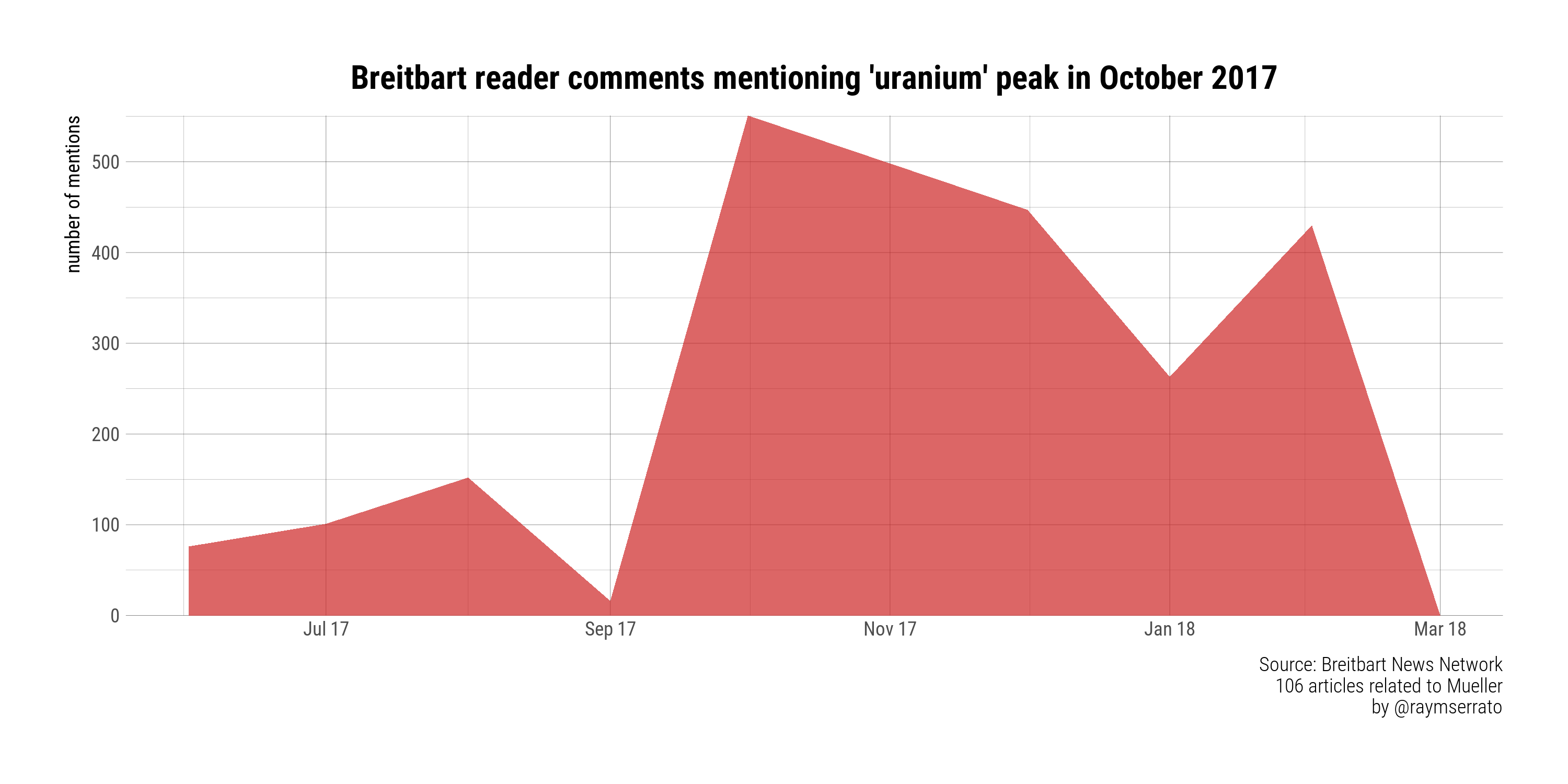 We can see that the number of comments mentioning ‘uranium’ peaked in October 2017. But what are these comments about? We can take a look with a sample.

Comments seem to be largely about allegations of a deal between Clinton and Russia in which Clinton traded US stakes in uranium for donations. This story has been pretty well covered and debunked by credible media (and, FWIW, Snopes). We can also use the gtrendsR package to grab data from the last 12 months of Google Trends to see when people were searching for the term ‘uranium.’ 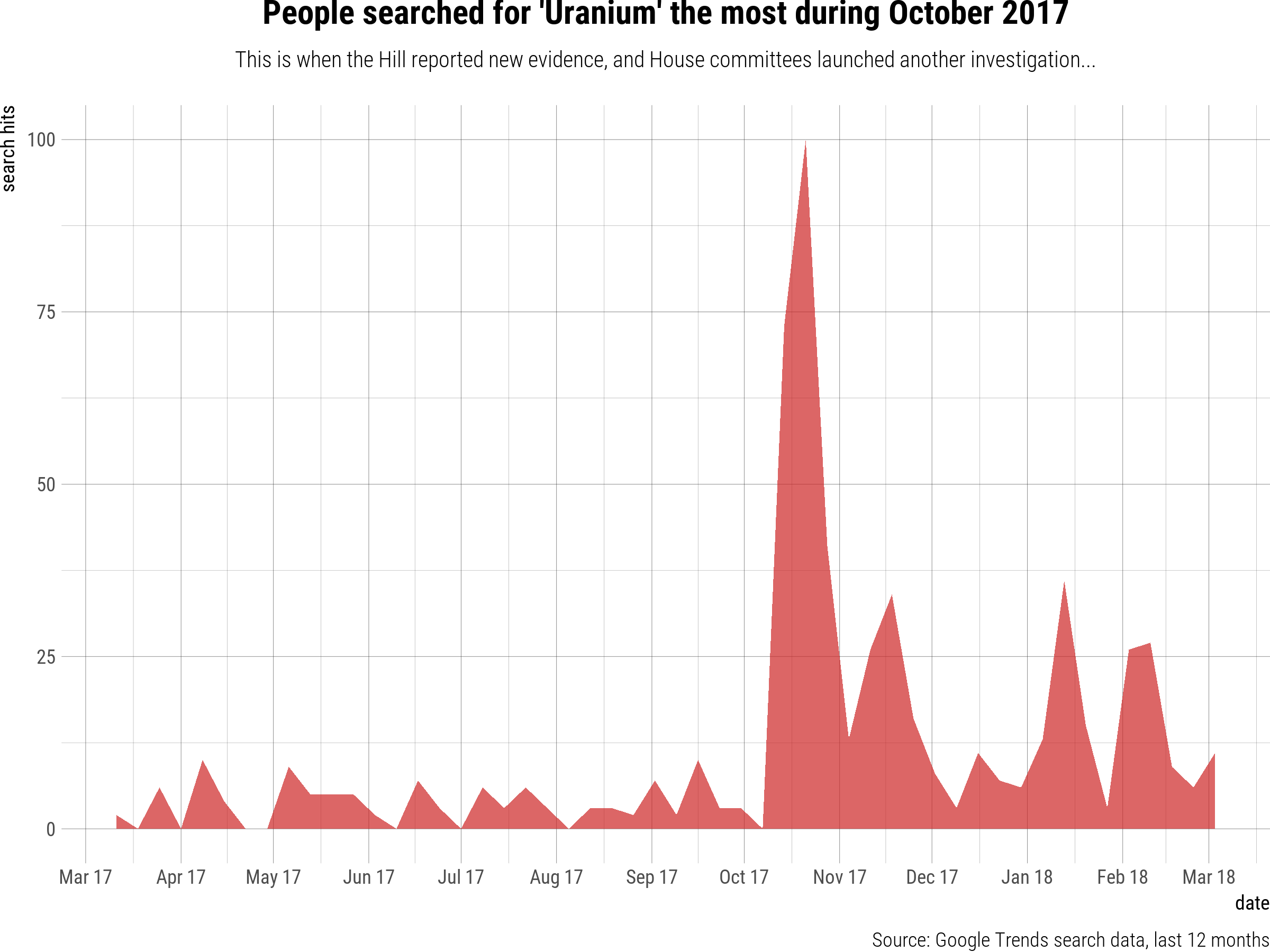 We see a similar peak in October. Although we don’t know the intent behind Google searches, we know that this is the month when the Hill released a new report about the Clinton-uranium allegations, so the uptick in searches (and comments on Breitbart) are likely a result of media reporting.

How long did it take Breitbart readers to comment on Mueller-related articles?

Each comment is associated with a post_created_at variable, which looks like "2018-03-02 19:54:36 PST" and by looking at the difference between this time and when the article was posted (thread_created_at), we can figure out how long it took a reader to comment on an article after it was posted.

I was inititally interested in this question because I wondered if trolls would quickly comment on articles about the Mueller investigation, in some effort to shape the narrative in Trump’s favor. In retrospect, this probably wasn’t the best question to ask since trolls commenting on Breitbart articles would be preaching to the converted anyway (so why would they waste the time and effort). 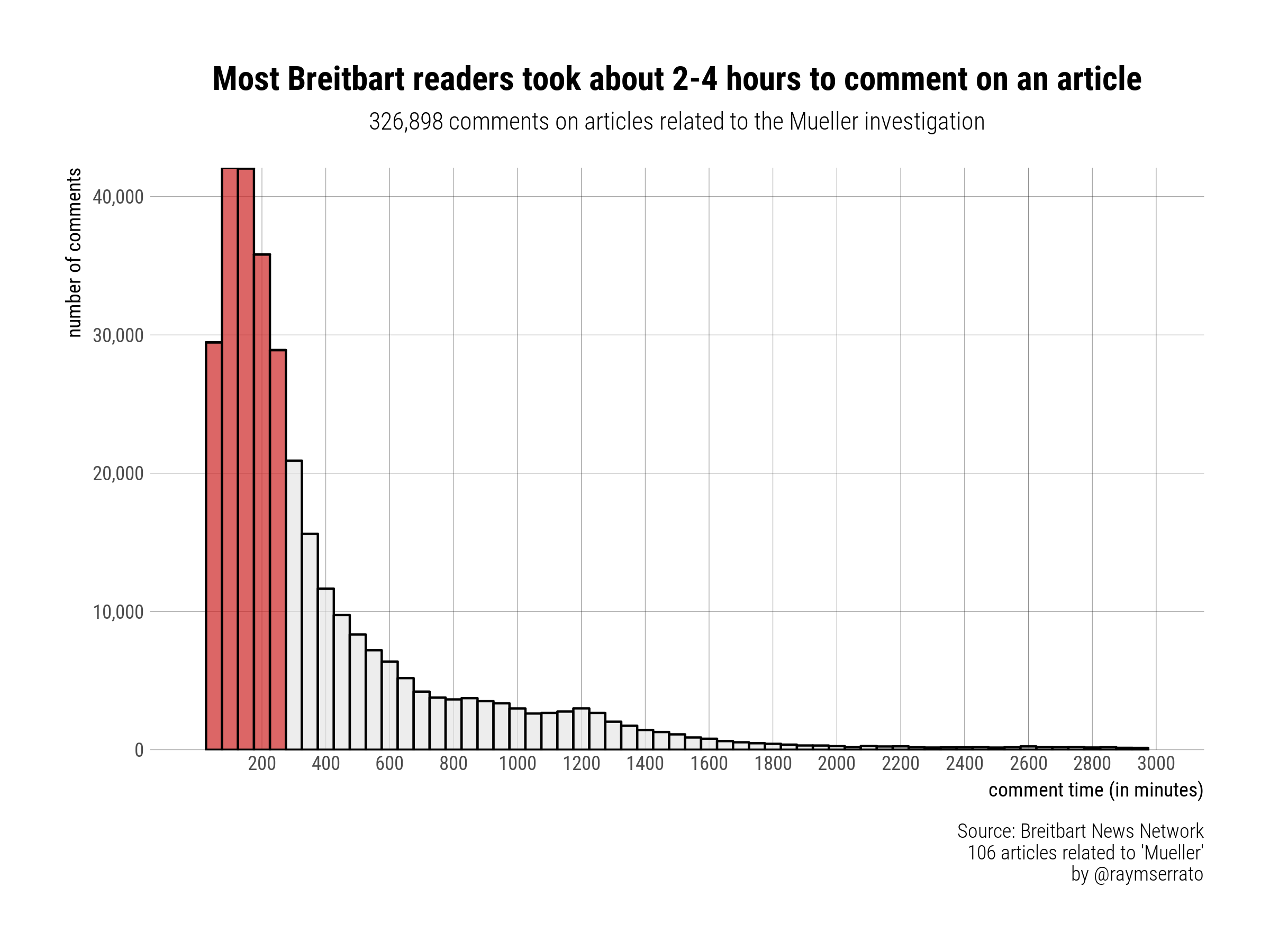 Since I was analyzing the post_created_at variable, I also looked at the number of comments for each hour and found that most Breitbart readers comment between 2000-0300 (PST). 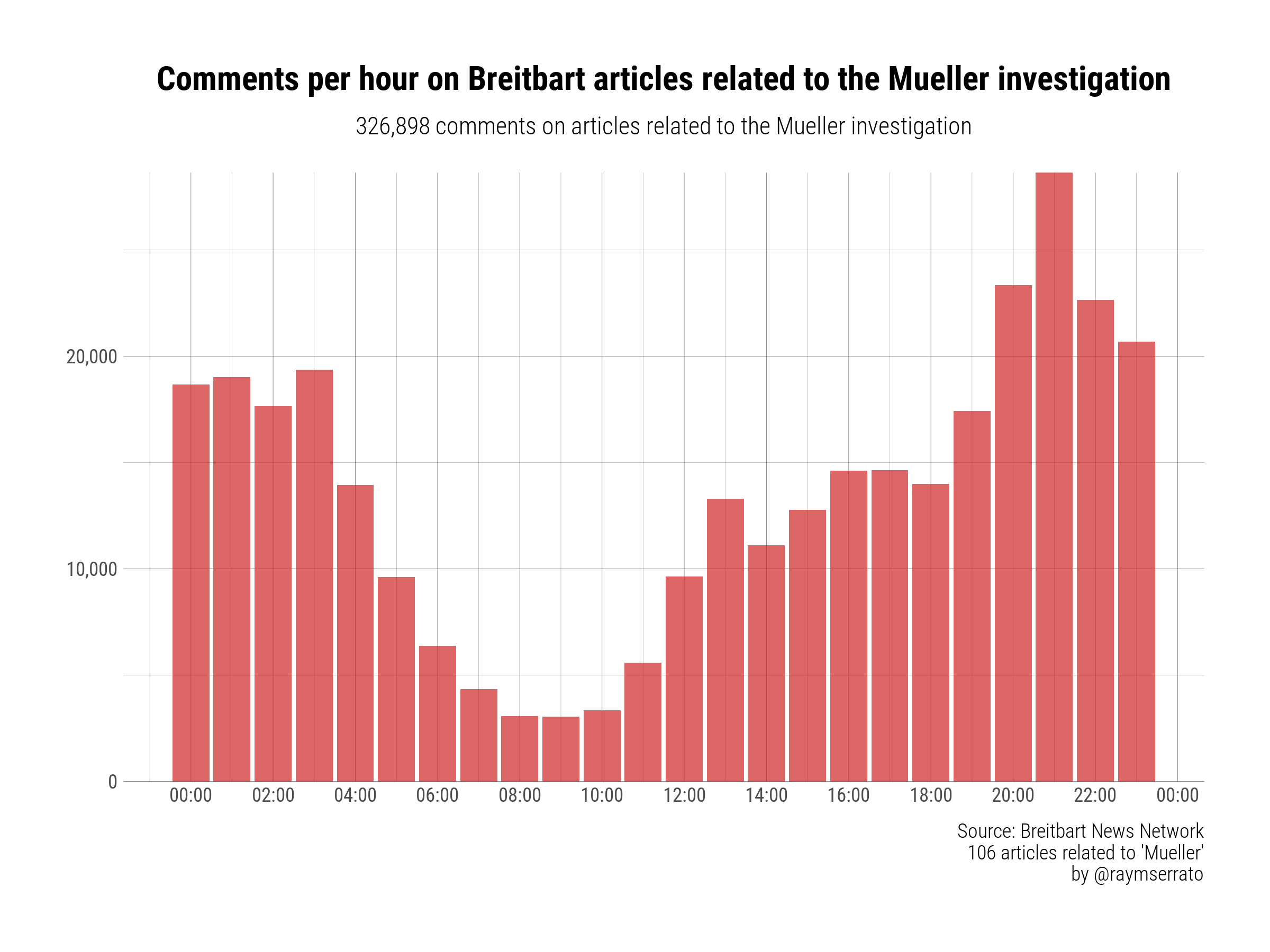 What are the most frequent word pairings in Breitbart reader comments?

Using the tidytext package again, we can also break comments up into the most common word pairs, or bigrams, and calculate the frequency of their occurence. There are some familiar bigrams here, such as “fake news” and “witch hunt,” but also the more concerning “fire mueller.” 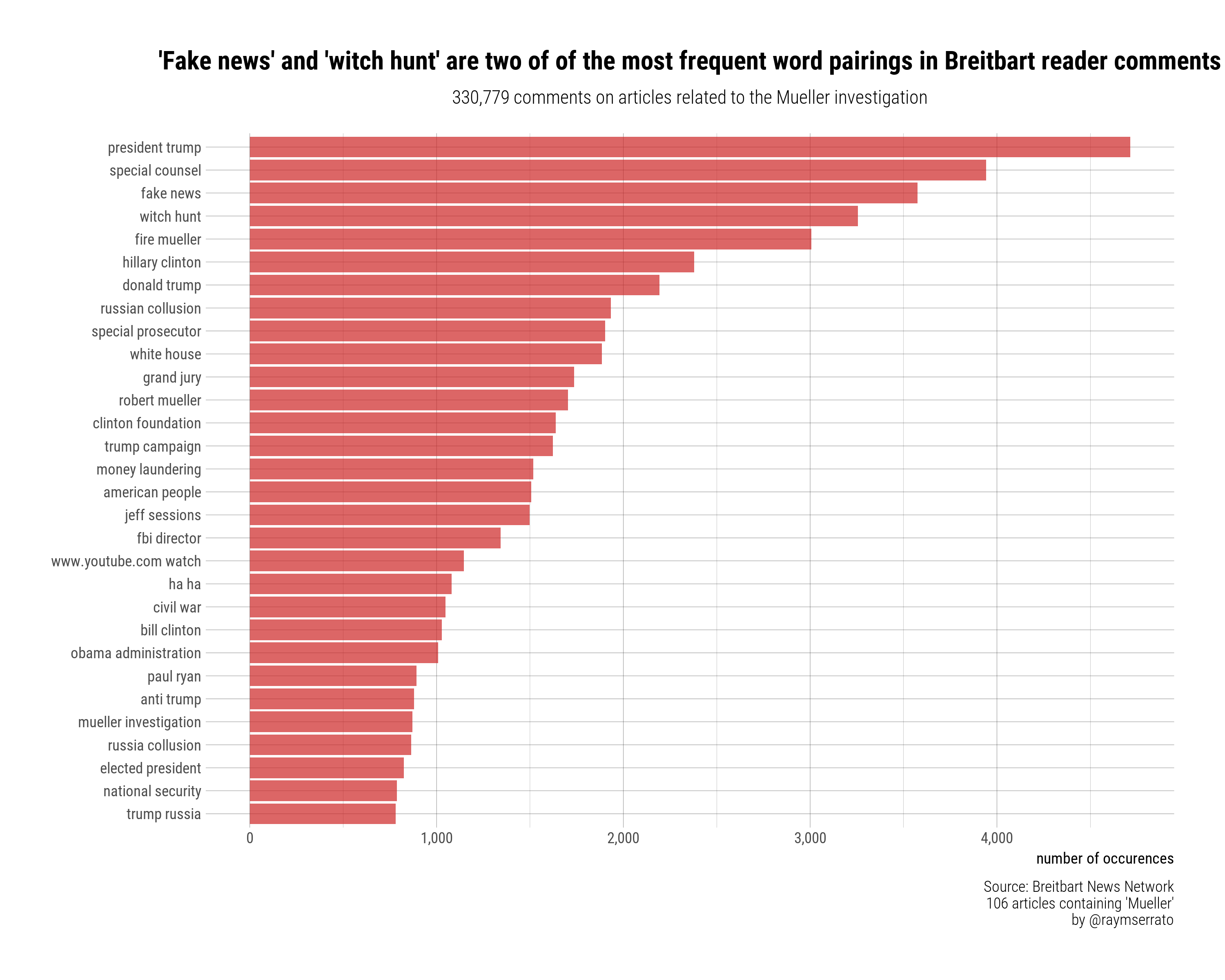 What links do Breitbart readers share in their comments?

We can also mine reader comments to find which other media they are referencing. Most links shared in reader comments are to YouTube videos - by a long stretch. I didn’t have the time to go through every single video, but many of them are to far-right “media” and other channels dabbling in “Deep State” conspiracy theories, such as the The Next News Network and the American Intelligence Media. Next on the list is the far-right fringe website, The Gateway Pundit. 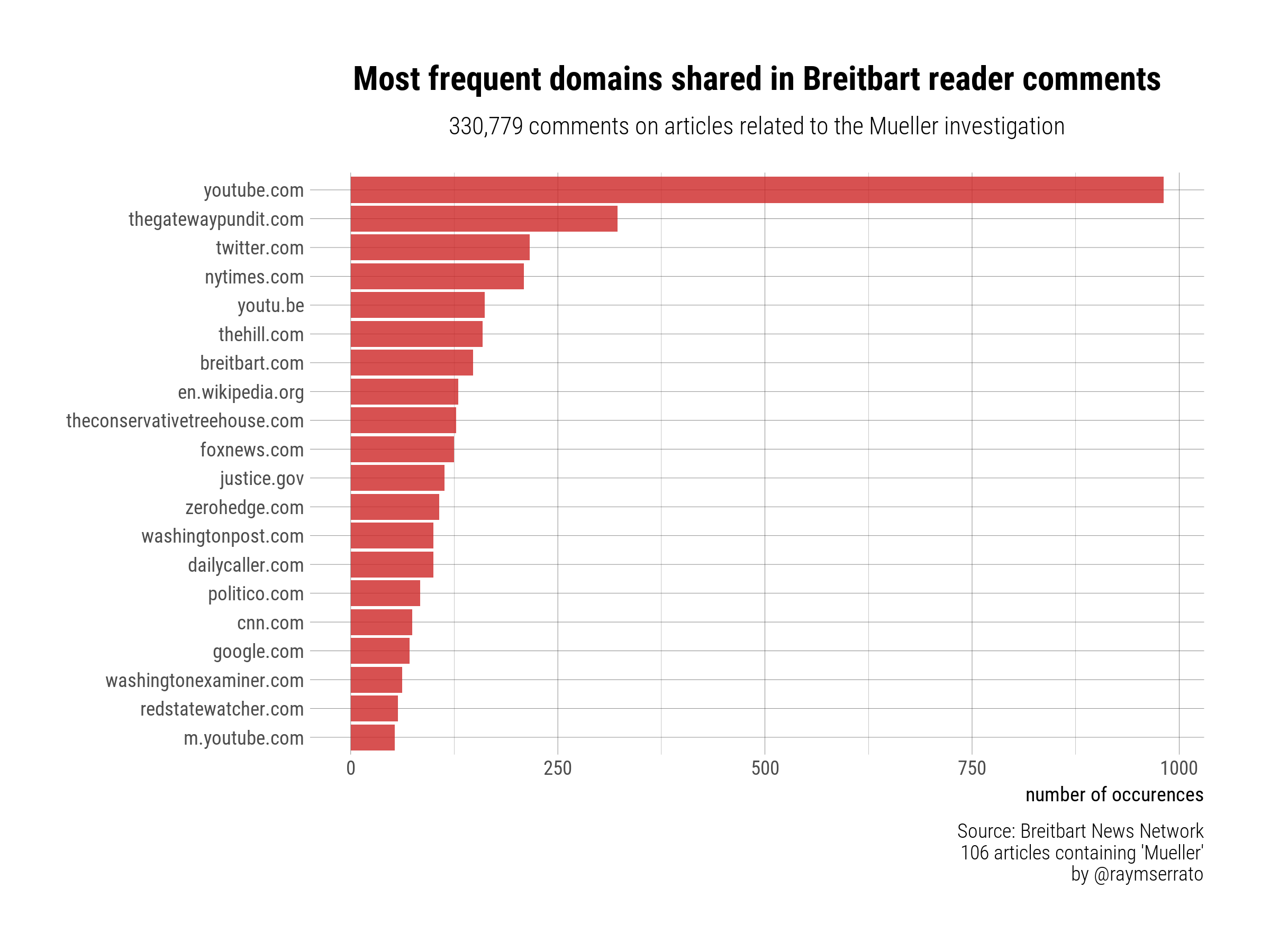 I wish I could say I was surprised by some of these findings. But given that Breitbart News peddles in conspiracy theories, intentional lies, and paranoia, I suppose all this is pretty predictable.