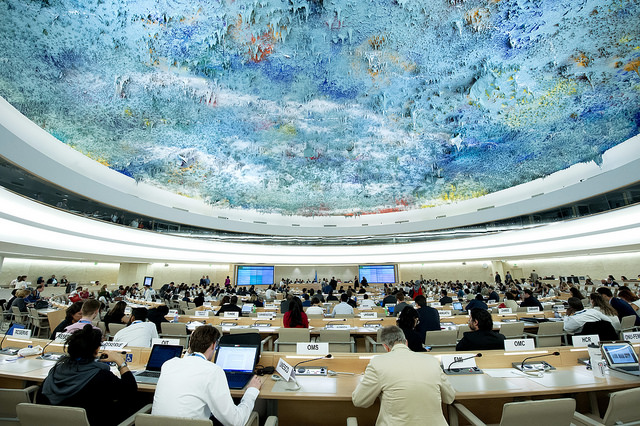 In my last blog post, I took a look at how election observers write about elections when reporting their findings. In that post, I mentioned how election observers usually reference international treaties in their reports and assess how countries fulfill their treaty obligations, for example, by ensuring that all citizens have the right to vote and stand in elections; freedom of association and expression during the campaign; the right to a fair trial and equality before the law; and more. The International Covenant for Civil and Political Rights (ICCPR) governs all of these rights, and 169 countries have ratified the treaty.

Interestingly, the ICCPR also has what is called an “Optional Protcol” (you can read more about what an Optional Protocol is here). The ICCPR’s Optional Protocol is itself a treaty, and countries can opt to ratify it, thereby allowing individuals to complain to the treaty’s expert body - the Human Rights Committee (HRC) - if they believe their rights have been violated by the state in question. Eight other treaties have a similar “complaint mechanism”, which is usually monitored by the respective treaty body.

But how often are complaints made to these expert treaty bodies? What kind of rights are being violated, and which countries are the main offenders? And how do these bodies rule on the cases brought before them? To explore these questions, I started with the ICCPR, since it’s the treaty I am most familiar with in my field of work (elections), and I was interested to see if the rights that election observers often tout are also reflected in complaints brought to the HRC.

Luckily, the Centre for Civil and Political Rights, an non-governmental oganisation based in Geneva, has an excellent database of case-law and briefs for complaints against countries party to the ICCPR’s Optional Protcol. This database has a table that has the title of the compalint, relevant articles of the treaty, keywords associated with the complaint, the date of the complaint, and the treaty body’s ruling, or outcome of the case.

On the database page, I identified the table with all the information I needed and used rvest to get scraping. (I adapted the code to scrape from Maëlle Salmon’s super post about scraping the Guardian, which is a great read!).

I now had a dataframe with 1762 observations and 6 variables. Next, I renamed the columns and cleaned up some of the dataframe.

I knew that I wanted to add a Country column, and to do so I would need to extract the country names from the Title column. I noticed that each Title had a specific format, like so:

Countries were always found after the “v.” and before the carriage return (\r) and new line (\n). I had planned to use stringr to extract all of the country names based on a pattern, but unfortunately, my knowledge of regular expressions wasn’t quite up to stuff. After several hours of trying and nearly succeeding and then poring through Stack Overflow, I finally submitted a question, and someone helped me out. I love Stack Overflow.

Unfortunately, when I used this regular expression, it still didn’t catch all of the countries. First, there were a number of countries that also had “(xxth session)” in the title. I had to identify and replace all of these. In other cases, I managed to extract the country name, as well as other text (“van der Hoot v. the Netherlands”), so I had to identify these rows and manually change them. There were also other quirks that weren’t caught by the regular expresssion. All of it was a long, iterative process, and in the end, I still had to identify all of the unique problems and simply recode the values. This is how it went:

I finally had a dataframe I could work with:

What are the most frequent rulings by the Human Rights Committee?

I started my analysis by looking at how the Human Rights Committee has ruled on complaints.

There are a lot of categories that make this a little confusing. To clear things up, I e-mailed the CCPR Centre to ask about their coding of the cases. I won’t go into too much detail, but “merits” just means that “all procedural conditions are fulfilled,” and “partially admissible” is where “one part of the case is declared inadmissible, which means the merits of that part of the case will not be examined. Other parts of the case, however, are admissible and the Committee will adopt a view for those parts. This is why the term ‘partially admissible’ is combined with ‘violation’ or ‘no violation’.”

For this analysis, I decided to simplify and recoded the outcomes into the following groups: Merits - violations, Merits - no violations, Inadmissible, and Discontinued. 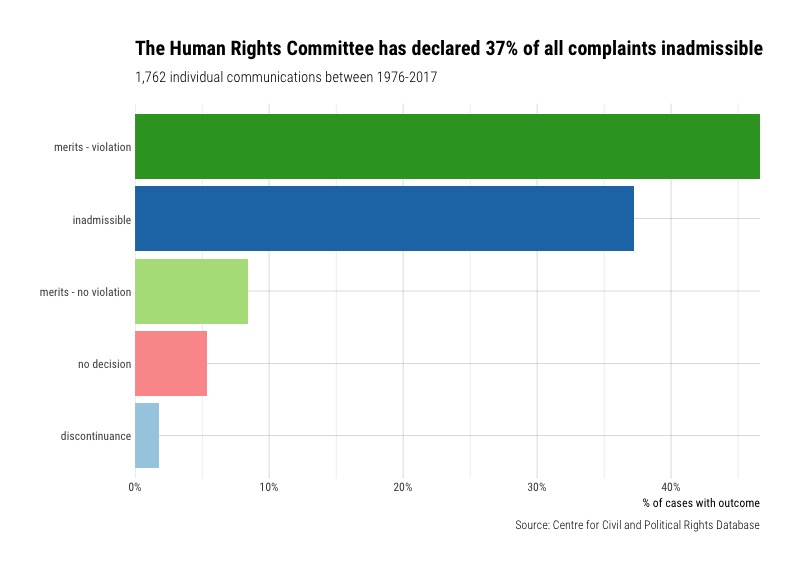 What exactly is happening with the complaints process that inadmissible decisions are so high? We can’t answer this question with the data we have here. But you can read more about the admissibility of complaints and the many factors that committees must consider when making this decision. It seems extremely complex.

Which countries are often accused of violating civil and political rights? 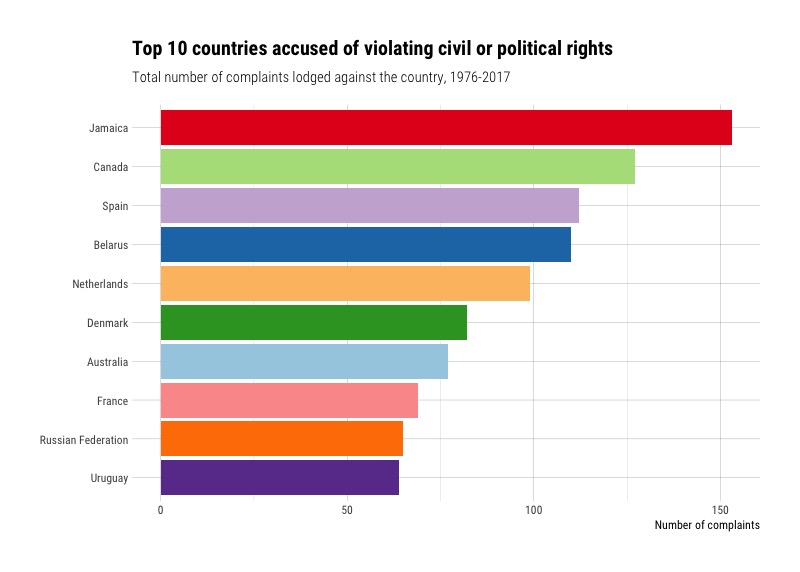 I find these results quite surprising. Some of the most advanced democracies in the world are in the top ten, alongside countries better known for their authoritarian tendencies. There could be many reasons for these findings though, such as human rights activists who act as third parties and bring cases to the HRC; robust institutions like national human rights commissions, which also help to lodge such complaints; or the simple fact that some countries frequenty do violate civil and political rights.

But these are just countries accused of violations. What about countries where the HRC ruled they had indeed violated someone’s rights? We can filter down to cases where the outcome was a violation, and group the countries and outcomes together. 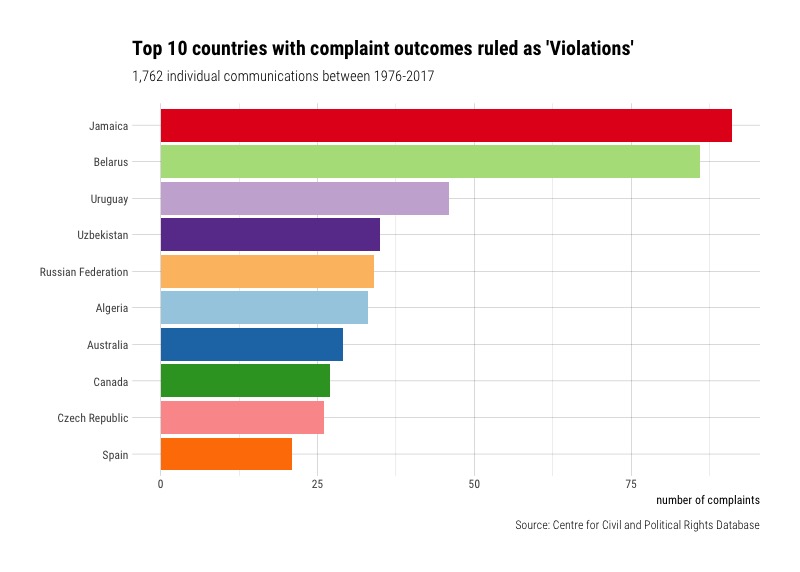 This chart is a little different. Jamaica is still the top offender, but there are now other countries in the chart like the Czech Republic and Algeria. And although the Netherlands and Denmark had been among the most accused countries, they are not top among those with violations.

What kind of violations are countries committing?

Each case has been coded with “Keywords” that can tell us what rights the country may have violated. The column looks like this:

Each row has a series of strings - keywords or phrases - that we can split apart, and then group together with the outcome of cases to find violations. 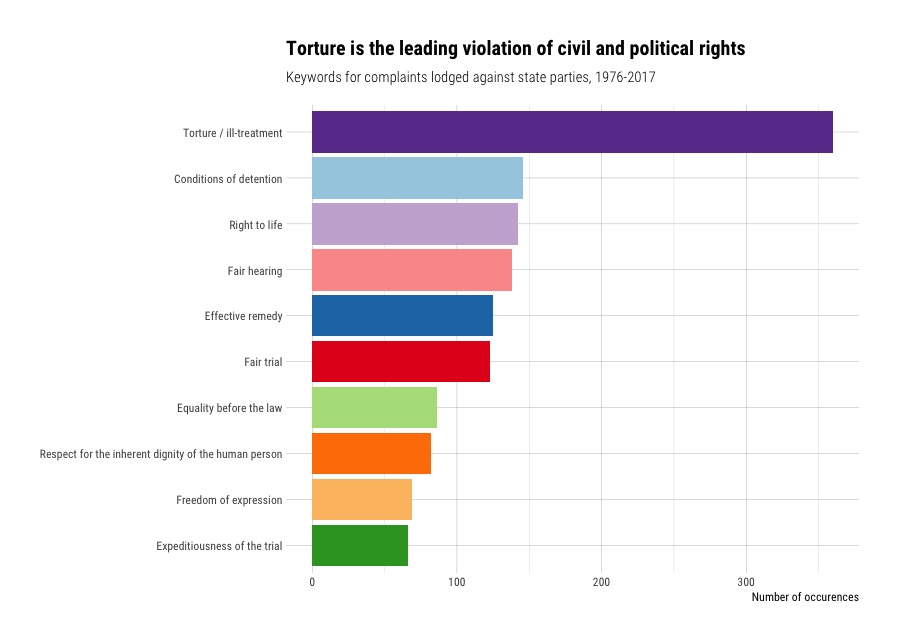 We find that, at least according to the HRC’s rulings, countries are violationg the prohibition on torture more than any other violation. It’s interesting that, though the ICCPR is regarded by election observers as the international treaty governing election rights, the complaints mechanism seems to be used for more serious violations.

Below, I’ve grouped different rights and assigned them to “elections,” then filtered the keywords on that basis to see how many cases might be related:

These are surprisingly low figures, and “Freedom of opinion” is a rather broad category that isn’t only about elections.

But let’s return to this finding about torture because we can also look at which countries are the main culprits.

How have the number of complaints progressed over the years?

We can also look at how the number of complaints has fluctuated over the last 40 years. 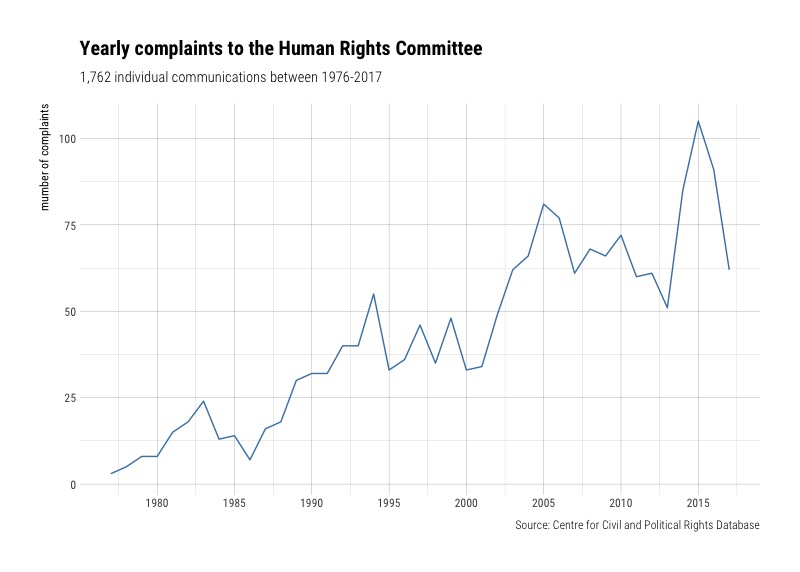 Overall, we see a steady increase. Next, we can filter to see the trend for cases resulting in violations, no violations, or inadmissible. 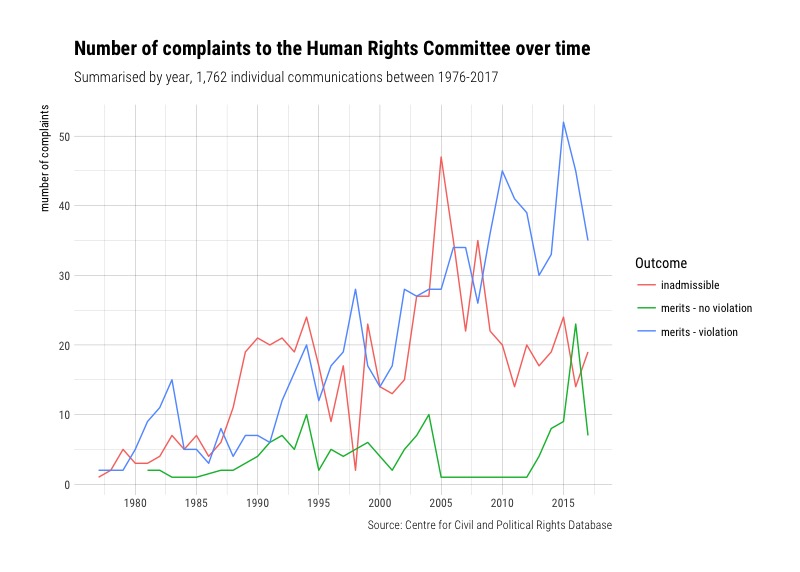 We can also look at a time-series over the years by grouping all countries together. We get a pretty messy plot with multiple time-series. 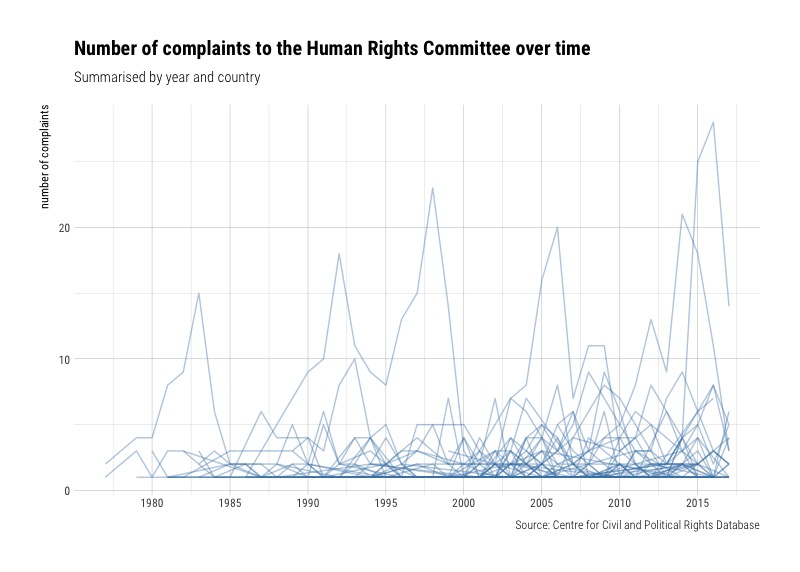 There are some peaks in the chart that could be interesting. Let’s highlight some of the countries to find out which ones they are: 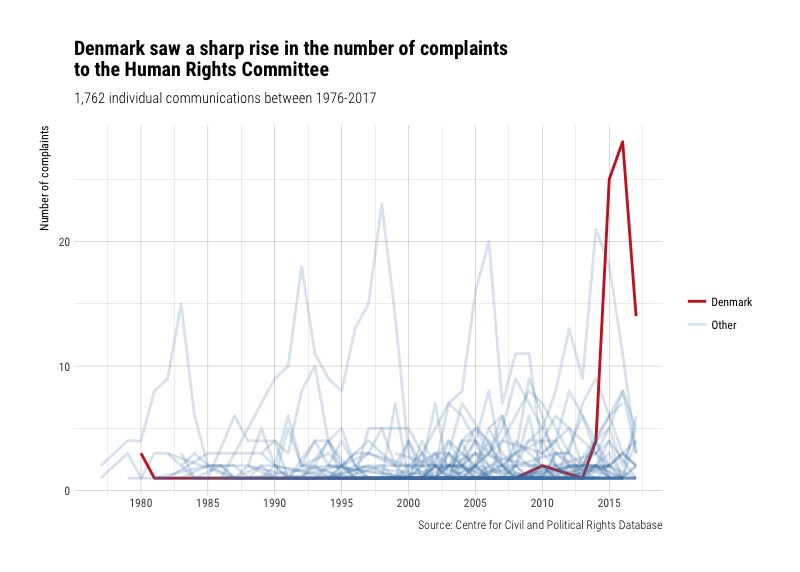 And a few other countries which peak at around 20 complaints throughout different points in time. 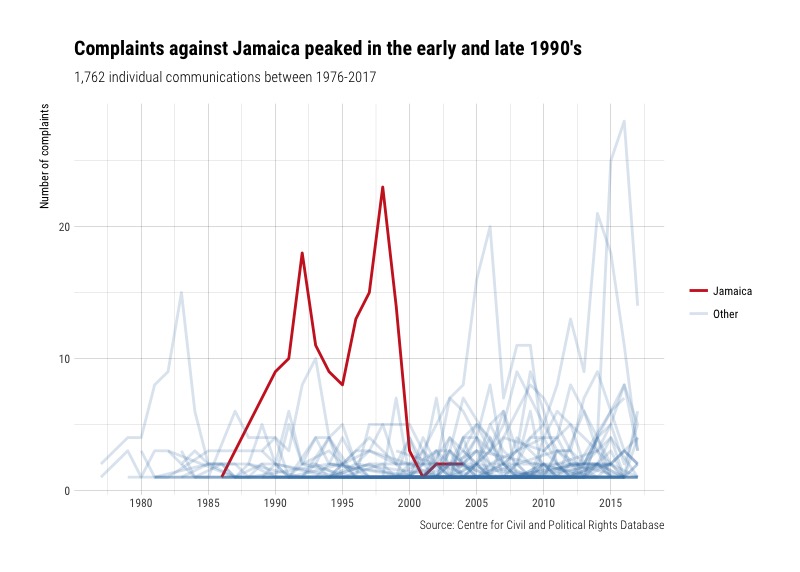 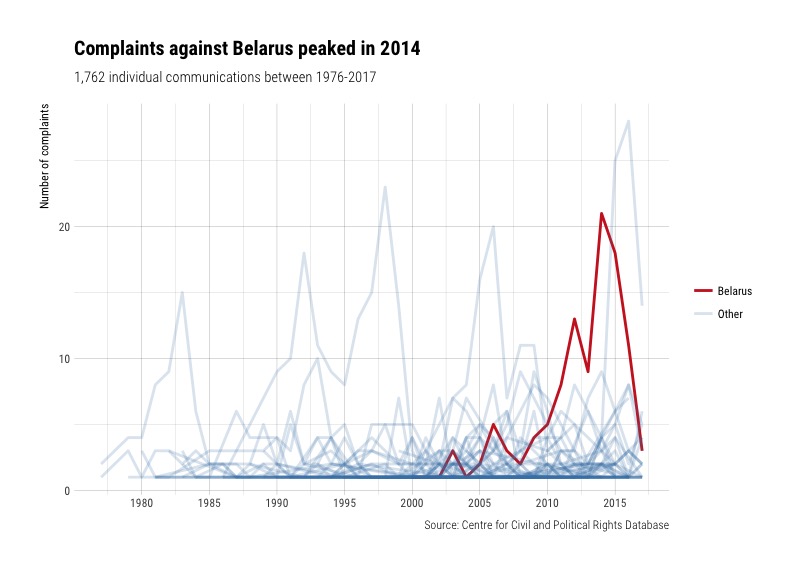 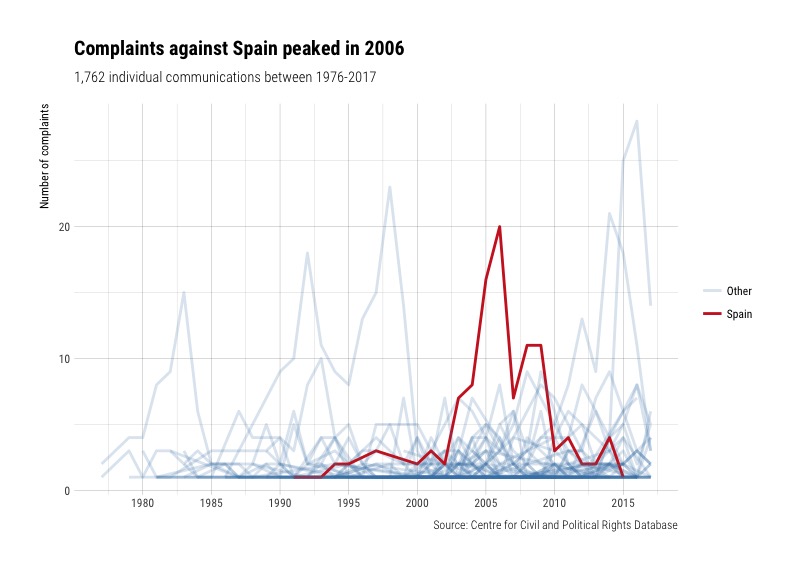 The data on complaints is quite interesting, and I think some of these findings warrant more research. Why does there appear to be an inverse relationship between inadmissible and violation rulings starting in 2007? What explains some of the peaks and declines in cases against certain countries? Is there a relationship between certain rulings and countries before the HRC? The HRC itself is made up of 14 members who serve for terms of four years. Could the membership of the HRC influence the rulings on cases?

I also learned a lot during this project. I was surprised at how easy it is to scrape data from tables thanks to rvest and how to use purrr, but I think I need a lot more practice with the latter to fully understand what’s going on. Dealing with the regular expressions to get the country names into another column really drove me mad and I wanted to give up at some points. But in the end it worked out.